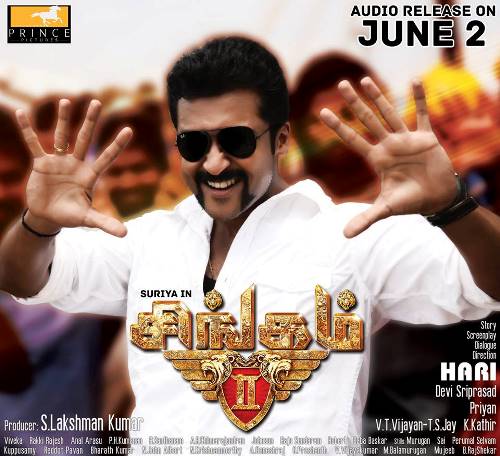 First time in all my Tamil movie-watching in New York and New Jersey, I witnessed in person Friday night that massive hero worship of Tamil film fans.  When the opening credits of Singam 2 started rolling, folks were already clapping and whistling, and when Surya appeared on screen for the first time, they burst into hoots and roars, and this went on for a couple of minutes.  The girl in front of me snapped a couple of pictures of the screen with her phone and promptly sent them off to her friends.

Interesting too – and also my first time seeing this here – was the very notable Sri Lankan presence at the cinema.  When an ad was run for some satellite channel’s upcoming cricket coverage, when clips of the Lankan team were shown, several clusters of moviegoers in the crowd went crazy – you’d think we were actually watching a big Sri Lanka vs. India match right then and there.

One group were seated right in front of me, mainly older teens, one of whom jokingly scolded a relative as he slowly progressed up the stairs in the darkness, searching for the rest of the family: “Oh, that’s mad lame!  Uncle, you’re so funny – wearing a shirt and tie to the movies!”  To which the now embarrassed, middle-aged man stammered “Er, well, I wasn’t sure….” before scuttling off to sit with the family members closer to his own age, leaving me to enjoy the engsters’ entertaining commentary throughout the film.

The hard thing about sequels is (usually) that everyone remembers the predecessor fondly and how great it was, so you have that Sword of Damocles to contend with from the get-go.
In several important ways, Singam 2 feels more like Singam Lite.  The music itself is nothing as fun or memorable as songs like En Idhayam, Kadhal Vandale or even Naane Indhiran were from the original, and the biggest gap for me was the one left by Prakash Raj.

Whereas he was Mayil Vaaganam,  the big don, in the original, here, there is a combo of three villains-in-one, and none of them are that compelling to watch.  Moreover, dialogue comments directed to the African member of that triumvirate were racist: at one point he was referred to as “…, you African monkey.”  And I write “African” because while I might guess the actor playing Danny “King of the Indian Ocean” was from West Africa, perhaps Nigerian, I don’t believe the film actually specified a country of origin for him.  But the people of the African continent aren’t the only ones targeted, there’s also a supposedly humorous bit where Singam’s sidekick Susai (Santhanam) is trying to evade some goons at a tea stall and when he turns around to face them, he pulls his eyelids sideways and make some jokey Chinese reference.

The story itself (set primarily in Tuticorin, which allows for some beautiful coastal and ocean shots) has the honest cop Durai Singam undercover as he tracks the goings on of some drug smugglers using the cover of salt exports to ship out their product.  This posting – which has him pretending to have resigned from the police force and now managing a high school – has also set back his plans to marry Kavya (Anushka Shetty), since his own father (not hers) finds the whole thing so humiliating, he can’t go through with the union of the two families.  Throw into the mix Hansika Motwani as Sathya, a well-to-do and rather spoiled girl who develops a heavy crush on the hero and pursues him relentlessly.

It’s an action flick and so yes, there are some engaging fights sequences, one in particular that I enjoyed, with a ripped and dripping Surya in a plain white short-sleeved shirt over a crisp veshti which he has hitched up to mini level, in order to be able to fight in a soaking downpour that suddenly erupts  (thank you, director Hari).  But the m.o. becomes repetitious quickly – beat one thug up, fling him through the window of his SUV, beat the next thug up and do the same, and on and on.

Happily, this film did come with subtitles – something you can still never be sure of when going to see a Tamil film in the U.S. – and they provided occasional moments of puzzlement and mirth.  I don’t know when the last time was that I saw the word “fillip” included among song lyrics (in Hindi or Tamil) and I did raise an eyebrow when Durai Singam scolded Sathya after one of her bigger attempts to claim him as her own and told her she was behaving “like a brazen hussy.”  I often wonder who it is that does these subtitles, but whomever they are, I’m convinced he/she must have degrees in English literature, with specializations in Dickens or Austen.

If you’re a die-hard Surya fan, then po.

He seems to do so few movies lately that you appreciate anything he appears in, though I did find myself thinking at times “Jeez, I wish someone would give this guy some other kinds of roles where he can stretch a bit more than his muscles.”

Otherwise, think it over.  It was interesting to me that the two elements I felt most lacking compared to the original Singam, the better music and Prakash Raj as Surya’s foil, were both referred to repeatedly throughout Singam 2.  Maybe they can bring Prakash back as his own twin in the inevitable Singam 3…

One thought on “Singam 2: Too Lite”