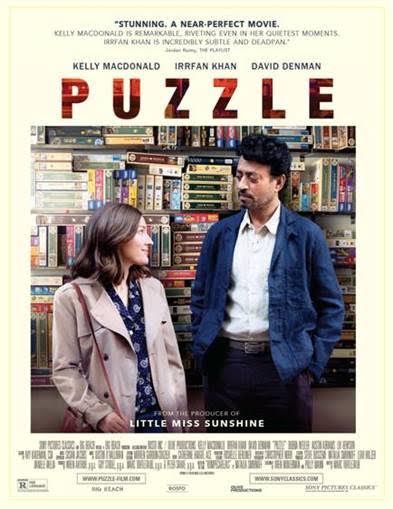 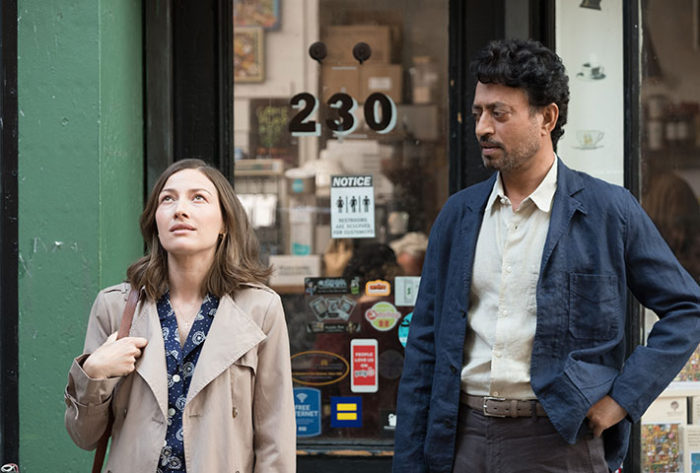 This is not a small film, but perhaps it will sound like that. Compared to the mega superhero franchises releasing during these stifling, muggy months, Puzzle may seem small by comparison. It’s quiet and gentle, even as it explores one woman’s major reassessment of her life thus far, as she steps beyond the strictures and routines of a long, traditional marriage.

Agnes is a suburban housewife (with all the anachronism that word suggests) in Connecticut, dutifully caring for her husband, Louie (David Denman), a mechanic who owns and runs a local auto repair shop, and their two teenage boys Ziggy and Gabe (Bubba Weiler and Austin Abrams). 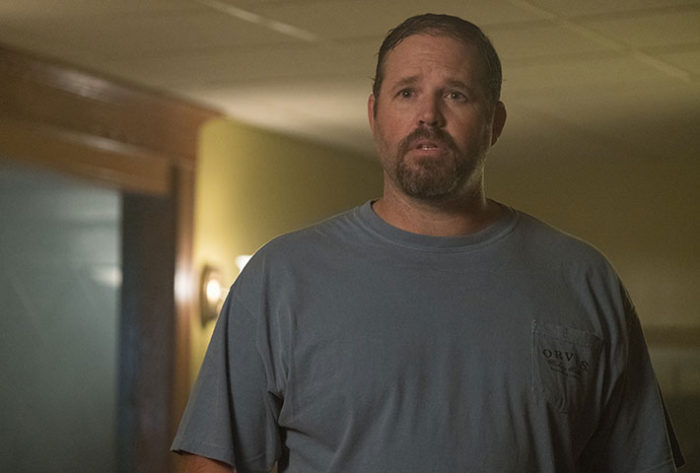 When we first see Agnes, she’s quietly, almost invisibly, serving and cleaning up at a family birthday party which you assume is Louie’s, or one of the boys’, but no – it’s actually her own. Kelly McDonald, with an American accent, endows the 40-something Agnes with both an awkward sense of self-abnegation as well as a headstrong, stubborn streak lying fallow until a series of events put in motion by this birthday.

When everyone’s gone to bed and she enjoys some wine and cake alone, Agnes discovers a jigsaw puzzle of a world map among the gifts.  The next day she opens the box and proceeds to complete the puzzle, very quickly.  It’s through this new (or renewed) love of putting together puzzles that she ventures to Manhattan for another, which leads to her meeting Robert (Irrfan Khan), a rakish assemblage of big hair (think back to The Namesake) and slim, long limbs. (There are times when I see him in a role like this, and I have James Coburn/Duffy flashbacks, in a good way.)

While they may seem like incongruous opposites – she’s wound tight and serious, he’s slack and bemused – through their puzzle work together, they come to know each other and fall in love, over Lent, the 40-day period of the year when Christians prepare for the Easter celebration of Christ’s resurrection, as winter yields to the arrival of spring. 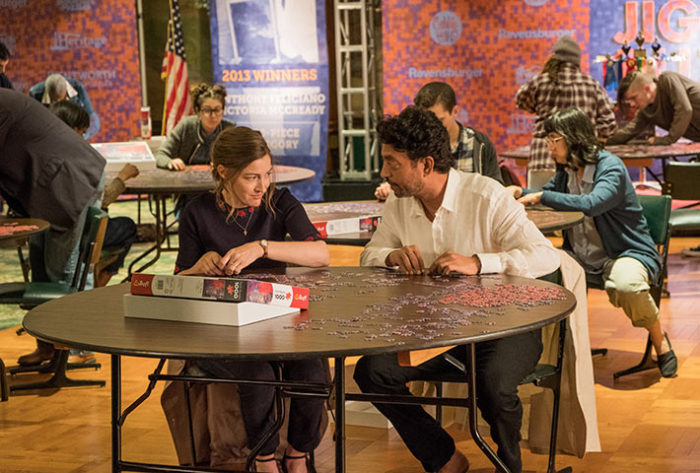 Robert is an inventor, who made his money from one successful patented creation but since then finds himself stymied. His wife has left him, and all he does – seemingly – is loll about at home, watching the news non-stop, remarking to Agnes on every visit of the latest natural disaster: floods in India, a tornado somewhere else, and so on.

Their homes mirror each other, both have a lot of dark, heavy wood – Agnes’ family home oozes history and continuity, whereas Robert’s Manhattan pad is more open and features expensive-looking marquetry.

One of Puzzle’s greatest strengths is that writers Oren Moverman and Polly Mann and debut director-veteran producer Marc Turtletaub chose to not fall back on lazy, one-dimensional stereotypes. While Louie can be oblivious to his wife’s needs at times, he also shows a sense of fairness with regard to a promise made to their sons (when other parents might have pulled the because-I-said-so card), and he is determined not to follow the path his older male relatives who raised a hand to the wife when she was deemed to be out of order. 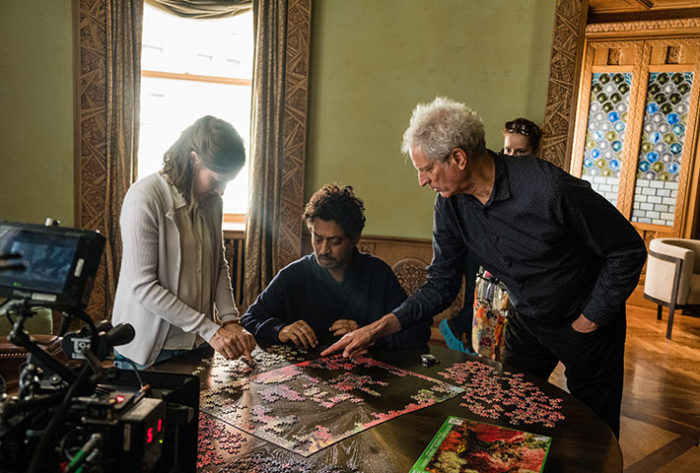 There’s humor in Puzzle too, of the dry sort – you likely won’t guffaw with laughter, but you will probably chuckle at the observations.

Don’t miss Puzzle. It’s a bright film, with heart, gentle humor and natural performances by the cast. Kelly McDonald blooms, as she takes Agnes from sleepwalking numbly through her days, to a woman who is reaching out for new experiences as she comes into her own. Irrfan is effortless as the bemused, news-addicted man also emerging from one state into another.

Puzzle opens in New York and Los Angeles on July 27.