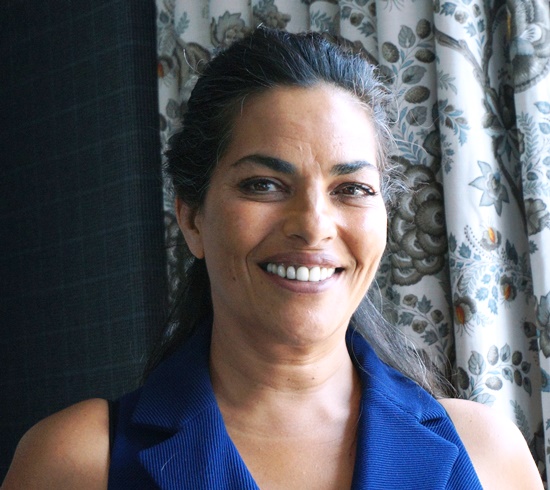 Sarita Choudhury’s latest film role is that of Jasleen in Learning to Drive, the bride-to-be who flies from India to marry a man she’s never met before, Darwan (Sir Ben Kingsley).

Q: How did you approach this character?

Sarita Choudhury: It’s odd to play someone who doesn’t speak, because it would almost be easier if she didn’t speak at all. But because I could speak a bit, it was really tricky knowing how to put out one word and another word but not knowing how to conjugate, but if you don’t know how to do  that you sound stupid, and I didn’t want her to be stupid. That part for me, the little speaking I had, was the hardest because I just wanted her to be this human being who people think has a lot of thoughts, and that was tricky.  It was hard.

Q: I kept wanting them to just break into Punjabi…

SC: We talked about that and I think because it would take a lot of training, and Ben and I are such perfectionists that way, I think if it was our natural go-to language, it would have been great. But to do it badly, that’s a whole other can of worms.  So then we had to play instead on the fact that he’s so in love with English and words. In a way, his strictness in wanting me to be good, we played it that way.

Q: You said before you had never worked with Sir Ben before, but had your paths every crossed anywhere?

Q: So how did you prepare? Was it at all intimidating? Did you ask friends who’d worked with him? Did you read up?

SC: The idea was intimidating because he was Gandhi and he was in Sexy Beast, so definitely I was intimidated, but Isabel (Coixet) had worked with him before. The fact she was working with him again, and Isabel is so laid back and funny, and she said “You’re gonna love Ben.” In one moment, all the insecurity of what it would be like went away. I knew if Isabel could say that it was true and she was right.

Q: Was your first scene together the meeting at JFK?

SC: We did the first scene first, thank God, because I think they wanted to capture that I didn’t know Ben, and my character didn’t either, so it was perfect. Just to watch him approach, and also, just to think “Wait a minute, I’ve come all the way to America, and this bedraggled-turban man is the man??” It was great to shoot that first.

Q: And was the wedding scene actually filmed in the gurudwara in Richmond Hill?

SC: Yes. It felt so special. They gave us access to everything we needed. It was so moving. They were with us, they showed us what to do. It was almost like it was real. It was very moving to me.

Q: You’ve had such a varied career, how much of that has been strategy and how much do you think is luck? You’ve managed to avoid getting typecast early on as “the hot babe” or “the hot Indian babe.”

SC: You never really know yourself what is strategy, and what is luck, and what is who you are. I think I’ve always been very resistant, like when I started off, you’d hear things like “You should lose weight” and I’d get so offended and think “In Rome, this is not considered ‘weight’.” I just remember there was a period I just couldn’t go to L.A. because I don’t know how to dress a certain way. I was such an urban kid, so I think in my immature rebellion, I just wouldn’t like if they said “Put on more make-up” I’d say “No.” Because I just knew my strength was just kinda’ being who I was and I couldn’t do that so it wasn’t even being a strategy. I was very strict and in a way it paid off because I found things that I loved and then it grew from that, and then you get a reputation for being that kind of actress and I was so grateful.

Q: You’ve done such great roles with Mira Nair a while back, have you ever talked about working together again?

SC: There was an age moment where I was the younger girl, and when I started growing, I couldn’t play the mother yet, so there was this gap. When she did Monsoon Wedding, she said “There’s no role for you because it’s either mother or daughter.” There was a ten-year moment where I couldn’t, but I’m sure it will happen again.

Q: Now that Mira Nair’s doing Monsoon Wedding as a musical, would you do it?

SC: I can’t sing to save my life. When she said she was doing a musical I said “Oh God, I can have no part in that.” She (Mira) even laughs.

Q: How do you see the state of American films right now, for women?

SC: I feel like I’m lucky to be in this time that is changing because cable TV has opened up a lot for women. Like I saw this show Togetherness – amazing, the women roles and the age group. And even Homeland, the lead is a woman. Cinema is a little different than cable. People aren’t going. I went to see a movie the other day and there were three other people. It’s hard to get people in cos they can see it at home.

I saw an Italian movie the other day, Il Capitale Umano, and everyone was in their late 40s, early 50s, playing sexual beings, playing love interests, intellectuals, whatever – and I realized watching it, I was in heaven. I didn’t have that euphoria before and I thought “Oh! This is a big gap in the (US film) industry. Why aren’t people doing this more?” And I think maybe they’re starting to, but it’s a little behind cable. I never thought I’d say that!

Q: One last question… what does the tattoo at the top of your left arm say?

SC: It says ‘water’ in Bengali. I love being in water, swimming, I love when it rains, it’s just something I know I’ll never tire of.