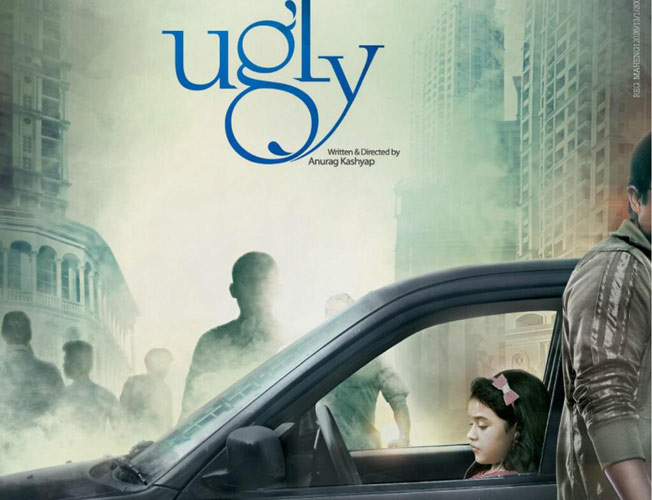 The 2014 NYIFF opened Monday night with director Anurag Kashap’s latest film, Ugly, a disturbing study of several lives unraveling simultaneously and revealing the ugliness inside of each.

A 10-year-old girl vanishes from a busy street in Bombay.  She’s been left alone in the car by her father, Rahul, a struggling actor, while he goes to run an errand.  She is with him as part of her regular weekend visit.  The parents are divorced, and her mother, Shalini (Tejaswini Kohlapure), has remarried a police chief, while the father is involved with a film industry item girl (played by Surveen Chawla), who is married, but doesn’t let that stand in her way.

The child’s disappearance serves as catalyst and the last straw for her parents and their attendant partners and others in their close circle.  It also provokes all of them – to a one – to behave at their very worst.  Over the six days that elapse during the film, we witness extortion, beatings, lying and so many doublecrosses it would make you dizzy.  At a time when you would imagine everyone would spring to action and work together with the sole objective of finding the child, instead their jealousies and greed come to the fore.  Central to much of this dynamic is the enmity between Rahul (played by Rahul Bhatt) and Shalini’s current husband, the tightly coiled police chief Shoumik Bose (played by Rohit Roy).

Over the course of the film, we learn that this triangle dates back to when they were at school together, where Rahul was the hotter commodity.  Later in life, as Bose has ascended to power, he’s used it and the resources at his disposal as a police chief to stalk Shalini.  Even after marrying her, he continues to bug and listen to all her phone calls.

In Ugly, as so often in his other films, Kashap uses his musical score to create and enhance the mood of the film, except unlike Dev D or Gulaal, you won’t be humming anything afterward.  From the first frames, the music serves to feed that unsettling atmosphere you’ve just stepped into.  The lighting too is often harsh and wholly unflattering, frequently from a fluorescent light strip.  At no time do any of the actors look good, they’re all shadows and greenish pallor.

The film is a hard watch.  For two hours the viewer inhabits a sinister world where even your closest friends and family will steal from you and stab you in the back during your darkest hour.  Rahul Bhat is convincing as the jittery, self-important wannabe actor.  A special mention should be made of Vineet Kumar Singh’s thoroughly convincing portrayal of Chaitanya, the slimy, calculating casting director with bad taste in facial hair, whose entire wardrobe – it would appear – consists of shiny shirts and pants.