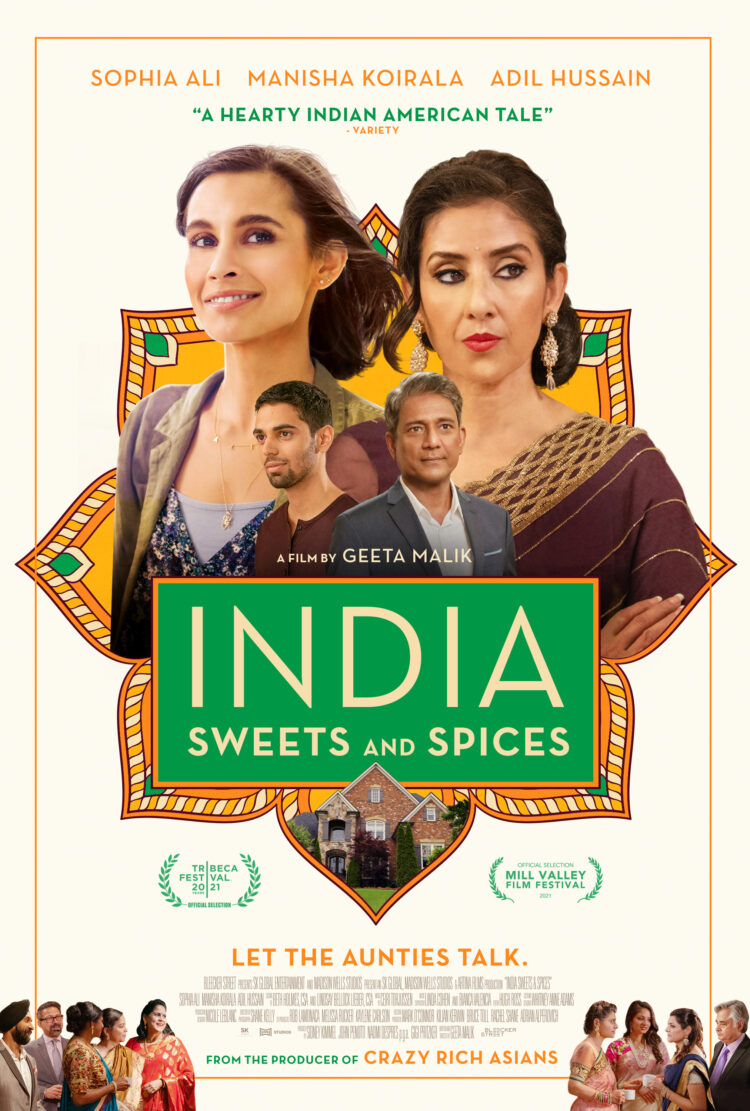 Geeta Malik’s India Sweets and Spices takes place in an affluent New Jersey suburb over the course of one recent summer, when Alia Kapur (Sophia Ali of Grey’s Anatomy fame) comes home from her freshman year of hard work at UCLA (straight As, making it onto the Dean’s list), intending to relax in her parents’ pool and just have fun.

But Mom Sheila (Manisha Koirala) has other plans. Among the very well-heeled Indian families in Ruby Hill, she and Ranjit (Adil Hussain) are about as high up on the upwardly mobile food chain as their peers could hope to be. Alia’s father is a successful heart surgeon, a slim and chill golf-playing perfect specimen of middle-aged Dadhood, and Sheila is his elegant, reserved-to-the-point-of-icy, flawless wife and mother to their three children. Alia, as the eldest, is the focus of their ambitions for the next generation of high-achieving, high-earning members of this close-knit community, something on display in the other Indian families we meet.

As with most 18- or 19-year-olds home after that first year of independence and freedom away at college, Alia chafes at her parents’ fussing, but she plays the part of the good daughter and goes along with the salon appointment and fancy dress required for the first party Alia is brought to, that of the Bhatias.

What we see at play here, during the party, is the core struggle in India Sweets and Spices – no, it’s not the ABCD angst we might have seen in a film a decade or so back – it’s the generational rift between the middle-aged parents and their college-age offspring who are trying to make their own way.

Everyone has a public face they put on for the parties (and the attendant selfies) – new saris, big jewels, plastic smiles, the kids’ deference to the Aunties and Uncles, the girls (only) dutifully circulating trays of samosas. To the kids, their parents striving and flaunting of wealth seems silly and pointless and often laughable, while the parents just want their kids to excel at school and life, and take their public behavior in front of the neighbors as seriously as their parents do.

Alia unwittingly sets off a bomb in the midst of her family life when she extends an invitation to the Duttas, new owners of the local Indian grocery shop, to her parents’ party the following weekend. This innocent faux pas (the Duttas are solidly middle class, and therefore far removed from the Kapurs’ social circle) also reveals that Bhairavi Dutta (played with calm self-assurance by Deepti Gupta) was at university with Sheila decades earlier in Delhi.

While Bhairavi is thrilled to see her long lost friend, with whom she participated in some idealistic protests, Sheila is clearly horrified. To further complicate matters, Alia and Varun, the Duttas’ son, are quite taken with each other and soon fall into a relationship.

Alia is intrigued by the notion that her mother was once an activist who cared about more than money and status, and the daughter’s delving into this long-buried past has all sorts of ramifications for the whole family in the remaining weeks before Alia’s return to UCLA.

Director and writer Geeta Malik was inspired by her own childhood in Colorado, attending family parties among the Indian community there, and she worked on the script over several years, during which she became a mother to two daughters. India Sweets and Spices places the women characters at the heart of the story, while also placing them and their stories front and center. I wish we saw more of this at the movies. (In 2021, for crissakes!)

Sophia Ali brings a mix of warmth and moxie to the role, gracefully treading the line between loving daughter and her own woman. Manisha Koirala, who I adored in Dil Se and Company, nails the part of the haughty doyenne of Ruby Hill without making her a caricature, but she also hits the emotional notes the second half of the film requires. It was so lovely to see her on screen again, and not relegated to the sidelines as she might have been by other directors. More, please!

India Sweets and Spices is funny and moving as it depicts parents and adult children trying to understand each other across a generation gap, and both coming to see the other as full and complex human beings beyond the simplistic assumptions we sometimes make of the roles of mother or daughter. Whether you share my fangirlish adoration of Manisha Koirala or not, do check it out.